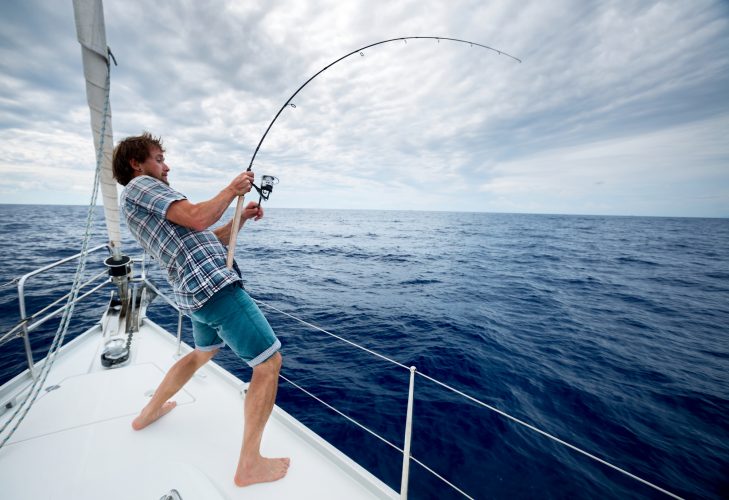 Ever been trolling with down riggers for hours and had no luck while you try and stare at your fish finder from across the boat, unable to tell if that is a fish or not? Wouldn’t it be nice if you could just pull out your phone and see what your fish finder sees right there at your fingertips? What would you do with yourself if you had that kind of power?

The Raymarine Dragonfly 7 Pro gives you just that power and much, much more. With its crystal-clear screen that shows its accurate and near real time image of the world just below the surface. Utilizing its Chirp technology, the Dragonfly is able to send and receive excellent data via sonar that is translated on the large LCD screen to show you RIGHT where you need to be to get the fish you are chasing. This Chirp technology also works directly below your boat as well, up to 600 feet, giving you the full spectrum of coverage out of a fish finder.

Being able to know when and where to strike is essential when fishing in big tournaments. Having the ability to retrieve and process data in real time in a brilliant and easy to see format is essential to make those right decisions that put you in the winner’s circle. The Dragonfly puts you on the fish so you only get to blame yourself, just kidding. This is a great fish finder and despite its power it is still user friendly.

This device comes with Chirp sonar technology the sends signals into the water, which allows you to see more of what’s going on under your boat. The DownVision feature will provide incredibly clear photo-like sonar images in combination with the ability to reach 600ft. The GPS on this device is built-in and comes with c-map essentials for charts. It also comes with a built-in Wi-Fi feature to allow you to stream data right into your smartphone, tablet or other device with the Raymarine Wi-Fish mobile app. The optical bonding LCD display will also be able to deliver brighter colors, sharper contrast and are guaranteed to never fog up.

A lot of fish finders boast the ability to see what is going on beyond just below the boat, and a lot of them do not live up to most of our expectations. The Dragonfly uses some really advanced technology that allows it to shoot sonar signals in various directions, and this in turns gives you a very detailed idea of what is going on around you. Not just under you, which is wonderful.

Being able to cruise at high speed and still be able to get accurate depth and fish reading is really awesome. This cuts down on a lot of time spent having to put around because your fish finder does not work over X speed. Cruising around and being able to see what is below at depths including 600 feet is really awesome. Not many fish finders out there boast that ability.

The screen is very detailed and makes it very easy for the user to see the data that is presented to them. It takes out a lot of the guess work and its weatherproof. Being able to see your fish finder is kind of important so not having the screen fog up and being able to see it in the bright sun, is pretty doggone important. With its larger screen and vibrant colors, it is very easy to tell what you are looking at, almost as if it were a video of the floor.

If you are not sitting close enough to see your fish finder because of where it is located fear not. NO longer do you have to squint your eyes and try and make out shapes and colors. With its built in WIFI and phone app you can pull it up on your smart phone. Welcome to the 21st century, now you are fishing in style.

The Dragonfly has a built in GPS with charts available by Jeppesen. If you are willing to spend more money and get the better charts the GPS system works rather nicely. Able to find details such as wrecks and marking honey holes for later exploration.

Another problem is the transducer only has a 13 foot cable. Most boats are going to require a little more than 13 feet to mount and when you order the extension from the company it takes a while to get the part. Something that could be hooked up in an hour now will take over week depending on shipping options. So, order one with your fish finder and don’t make the mistake of waiting.

The Included maps with the GPS are not great. In fact, they are downright terrible. Err on the side of caution and do not depend on this as your navigation system. The maps are not the best and in order to get access to the better ones it comes at around $150. Beyond that it works fine, you just will need to spend more to get more.

Being able to see in the water is what you are buying a fish finder for, and the Raymarine Dragonfly 7 Pro gives you that ability. With its powerful technology, it can scan the depths for you under and around your boat giving you crystal clear pictures of what is out there. Cutting down on the guess work and keeping you hooked on the fish is what the Dragonfly was made for.

The short cable for the install was a drawback, and the screen can be hard to see in the sun but overall, it’s a great fish finder. The information is clear and easy to see and understand. It gives you a very accurate and real time nearly video like representation of the floor below.